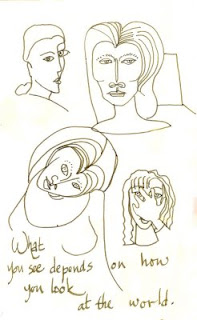 The longer I live, the more fascinated I am with the human mind. I wonder if there aren't some physiological factors that determine the vast differences between opinions and observations. I mean, is it possible that the shape of our ear canals, for example, make words sound different to each of us. . .so much so that they take on different meanings? Our current presidential election campaign is a good field of study in this regard. What makes one person hang rapturously on every memorized cliche that comes out of Sarah Palen's mouth, while another person wonders whether Sarah hasn't begun mocking Tina Fey, and is waiting for everyone to get the joke.
During that so-called debate, for example, I thought she might have been auditioning for Saturday Night Live, (hey, T.F. watch out or yer gunna be out of werk here darn soon).
But seriously folks, it wasn't Saturday Night Live, it was only Thursday, and God knows she wasn't funnin' us. The wise cracking, repetitious, self-determined monologue we heard from Mrs. Palen was only punctuated with peripheral dialog from the moderator and Palen's opponent. She listened to him just enough to pick up the key words that set her off on the next rehearsed, commercial-like message.
As a person who grew up learning to debate in actual forensic competitions, and who has taught and prepared students for the rigors of forensic debate, I was dumbfounded to see that poor facsimile of a debate qualify as part of our process for selecting national leadership. If the debates are truly for the sake of informing the American people, it seems to me that the moderator should have been able to request or direct Governor Palen to answer the question at hand.
Clearly, Senator Biden had prepared to debate a peer. He had given his adversary the highest respect in planning for an exchange of ideas and factual counterpunching. What he was given in return was a person of limited knowledge and experience who was groomed to combat reason with slogans, falsehoods, and innuendo. The press was waiting to catch Biden disrespecting his opponent because she was a woman, but when that woman disrespected him, her bad manners and wise-cracking comebacks were hailed as political accuity.
Of course, I must give her credit for her pre-debate strategy. She did such a brilliant job of preparing the world for a Burns and Allen experience through her television interviews, that all she had to do was stay at her podium repeating campaign slogans to win kudos from the press and Republican viewers across the country.
So I am still wondering if there isn't some physiological component to the vast difference in human comprehension. I know about nature and nurture, but there still seems to be a missing link in determining what makes us look at the same cow and argue about whether it is a black animal with white spots, or a white animal with black spots. At least we agree on the name.
Posted by Adriana Díaz at 3:02 PM No comments: