The Power of Poetry 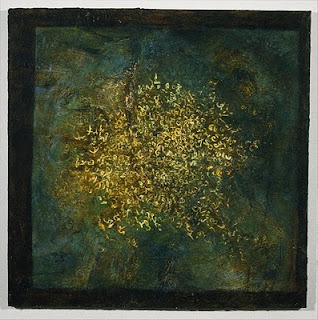 Thanks to Rap music, poetry and spoken word have surfaced in the life of American Pop culture.
But the role of poetry in the U.S. has largely been relegated to the intelligentsia, and with the crumbling state of our educational structures, it's not too likely that the mass majority of young people will know much about poetry beyond Rap and Hip Hop. This, in great part, is because of the democratic, if contentious, nature of our lifestyle.
Sadly, most Americans think poetry is about rhyme, or used in greeting cards to send well wishes to distant friends and relations.
But if we look at the role poetry has played in other parts of the world throughout history, we see that poetry is politically powerful. And in realizing that, each of us, can be empowered to read more poetry, and even write it for ourselves.
The painting published with this posting is called Antiquity. The markings coming out of the center are the foundational impulses of language expressed by the human hand. They are sophisticated in their symbolism, though ancient and primal. That's how I see the instinct of human beings to make poetry. It grows from the most independent and honorable impulse to be heard, to speak one's truth about life, and, in doing so, effect change.
Mary Pipher is a wonderful writer, and certainly very successful. She's the author of at least seven books, including the N.Y. Times bestseller, Reviving Ophelia. She also wrote a thought-provoking book about writing called Writing to Change the World. In her chapter about poetry, she talks about the power of poetry in the history of the Soviet Union, where samizdat, or underground poetry was an important subversive means of maintaining morale, communication, and strategies against a profoundly oppressive government. Even Doctor Zhivago, which most Americans treasure as a powerful love story, was smuggled out of the country in segments. Boris Pasternak, its author, barely escaped execution.
Russian poets became creative and skillful in ways of sharing their work. A good deal of it was memorized and recited in little clubs or gatherings. They made recordings on ex-ray film that could be played like phonograph records. There were also recordings of music and literature made on magnetic tape.
We have have never had to fight for the free expression of our poetry. Not that there hasn't been censorship in our country, but for the most part, poetry is not thought of as a political act in this country. That's where learning more about the subject, and the lives of American poets can set you straight.
I write this to raise consciousness about the freedom of creativity we enjoy. One has to wonder if a limitation isn't a catalyst. When someone tells you not to do something, don't you want to do it more? Stay away from those brownies. Don't drive so fast. You're not going to wear that are you? Think about it.
Now, don't go start writing poetry to tell the truth about the life you're living. I dare you.
Posted by Adriana Díaz at 10:58 AM No comments: 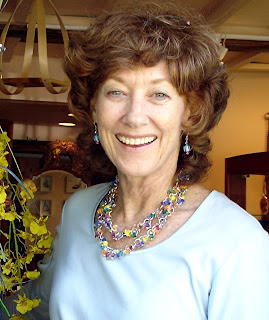 Last November a dear friend of mine lost her life in a light plane crash. Even as I write, four months later, after memorials and hymns and prayers, I cannot believe she's really not dancing on this earth.
Peg Noonan was a graceful spirit. She was a spiritual daughter of the muse Terpsichore in her love of dance. She was a teacher of NIA, and Zumba. At sixty-four she was in great shape, and seemed to love working out almost as much as she loved dancing.
But the thing that stayed with everyone who met Peg, was her vivacious love of life. She made friends with everyone she spoke to. And those of us who were fortunate enough to be her friend, knew that she was always with us in spirit whether she lived on the east coast or the west.
There was one small consolation to her death: she died with the sweetheart she'd finally found after more than twenty years of being divorced. They'd met only months before, and planned to marry this year. I did not know him, but I pray for him with my dear friend, that they may have, after all, a sweet life together.
Attempting to come to terms with Peg's death, I wrote the following poem which I leave here, in memorial.

In my grief
I think of you
suspended in
an interminable
cessation
of being.
There's not a word
not an adjective,
or verb,
not an expletive,
nor a bleep.
There's no phone call,
or cyberspace correspondence.
No questions.
No answers.

You are no longer breath,
nor graceful step.
Yet chassé you shall
on the memories
of dance floors we knew.

Our last lunch together,
sitting on the hem of the ocean,
the Pacific sun eavesdropping
on our buoyant words;
I see you there
as if I could touch the red curl
of your hair, or
hold your gentle hand.

If I had known you were
to fall from the sky
like Icarus from the sun,
I'd have prepared a field
of wool, dense as clouds,
and a bed of flowers,
fragrant and supple.
I'd have summoned birds
to give you wings and
bring you to rest
in slow, descending reverie.

But you enjoy now
the spacious affection
of stars.
You, aglow in
the cosmic landscape
beyond our understanding,
will visit Earth in
the echo of your laughter,
the remembrance of your
kind words, and the
persevering joy of your
vivacious spirit.

We, still planet-bound souls,
celebrate the grace of your
diaphanous presence,
sorrow's gravity dissolved by
the transcendent warmth of your
radiant smile.

Too late to say goodbye,
dear friend,
I lay my voice across the page
to say, at least, adieu.
Posted by Adriana Díaz at 1:18 PM No comments:

Observing Lent for Fun and Profit 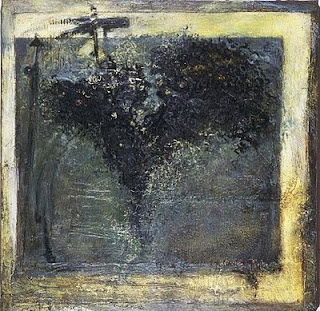 First, let me thank you for your perseverance. If you are reading this, it means you check in from time to time, because you believe in me and my desire to maintain a blog. I'm not remiss in this venture out of laziness. No, no. I really am involved in a very creative life. In a while I will reveal the project that has been absorbing so much of my time, but for now, I want to let you in on my Lenten promise.
As you may or may not know, Lent began last Wednesday. If you have trouble remembering it, the Catholic Church came up with a great reminder: Mardi Gras! (what, you think that's not a Catholic invention?) So last Wednesday, still revved up by the Zydeco party the night before, I decided I wanted to do something for Lent. In the old days I gave up things, but I have enough restrictions in my life, I thought, so what can I take on that could be a healthy practice that I might continue beyond Easter Sunday?
I already exercise and eat healthy food. I don't smoke or carouse or pick up men in bars, so it needed to be something I really needed. If you've followed this blog, you'll be proud of me for choosing a self-promotional Lenten habit. I promised myself that I'd do something every week to promote my work: Coaching practice, my work as a painter, writer, or teacher.
Yesterday I realized that it was Friday, and the first week was slipping through my fingers! Yikes! I still hadn't done anything self-promotional! So, here it is Saturday, and in the eleventh hour I am updating my blog.
The question is: does this blog really qualify as a self-promotional tool? That's where you come in! All it would take is one referral from you, and the answer is yes! So, get on that Twitter, email, or telephone and send someone my Coaching webpage (www.yourcreativelifecoach.com), or send them to see a few paintings (www.adrianadiaz.com). Of course you can send them straight to me: (adriana@yourcreativelifecoach.com). Honestly, I am a great coach. Your friend is welcome to a free sample session.
I'm also a fabulous teacher. With forty years of experience working with students of all ages (5-95), I can plan and execute classes for small groups or large (up to 25). No one teaches Creativity Empowerment like I do. My approach is ecclectic, non-threatening, enlightening, and FUN! I can focus on writing, painting, drawing, or a combination. I love to get the whole brain working together. A little workshop format party could be an exciting experience for your club or organization.
I'd love to hear more ideas for my Lenten self-promotion. Please mail them to me through this blog or send them to adriana@yourcreativelifecoach.com.
By the way, the painting on this posting is titled "Dark Tracing" It is 36"x36", mixed media on canvas. It is, like most of the work that accompanies this blog, For Sale.
Thanks for your help in keeping up my Lenten commitment. Keep watching here, I hope to be back soon.
Posted by Adriana Díaz at 11:58 AM No comments: