"Travelers' there is no path, paths are made by walking." Antonio Machado 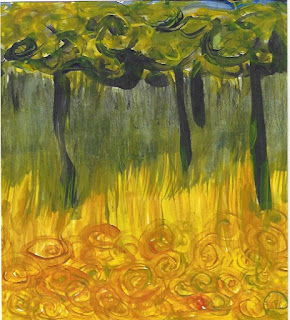 It was shocking to see how very long it has been since I posted an entry here. And I see that I intended to take up posting again on a regular schedule. As I journal, and do so without any prodding, it would seem that blogging should be an easy process. But the element of visibility makes blogging a form of self-promotion, and there is the issue that keeps me away.
Growing up, I was discouraged from any type of boasting or self-aggrandizement. Good grades were expected, and pride about accomplishments was kept quietly within the family. Self-promotion was bragging, and even blogging would qualify. I often feel embarrassed for people who push themselves into the public limelight even though self-promotion seems to be an essential part of modern life. Even people who have no talent, no skill, no accomplishments, nor even a profession now create their own "brand", to promote their face, body, personality, or their pet hamster.
Being shy or modest (not a word we hear very often) or just introverted is a definite detriment to success. If Vincent Van Gogh were painting today, he might be just as unknown as he was in his own time. The only thing that might make a difference would be if his brother Theo had computer skills and the attitude of a promoter.
So, maybe this entry speaks to some of you who share this issue with me. If so, it may be encouraging to know that someone else struggles with it as you do. Unfortunately, I don't have any tips for turning the tables. I have no suggestions for transforming you into a promotion-loving social media star. But then, we have Oprah Winfrey as our cheerleader, and there are many social media gurus. I've heard them, but it's my attitude toward self-promotion that remains an issue. I have attended meetings, conferences, and conventions for women in business hoping that something I learned there would teach me that self-promotion is fun and nourishing. I have listened earnestly, taken notes, I've even kept special notebooks. I once hired a personal business consultant. But after years of pushing myself to overcome what I have always considered a significant shortcoming, I have to recognize, that for good or bad, I am who I am. I am an artist. I am not a business person, I'm not a good promoter of my work.
I am deeply envious of those I see who have someone in their life who is happy to do the work of promotion for them. Sisters, brothers, husbands, children . . . any artist who has 'a someone' who believes in them and who takes pleasure in showing their work to the world, is twice blessed. If you are that fortunate, your gratitude to that person(s) should be unending.
I've never written publicly about the issue of self-promotion. In fact, this post feels like a confession. It shines a light on one of my faults, and in this society it is nearly a sin to fail in self-promotion. I don't know any one with some  type of ambition who is not on Facebook, for example. I took myself off of Facebook for a reason: I am appalled by Mark Zuckerberg's refusal to rein in the Russian hackers who smear that open forum with lies and misleading ads and posts. If everyone took a stand against that refusal to contribute positively to our democracy, the inventor of Facebook would at least have to question his role in the last presidential election. So there you are, I am not afraid to take a stand for what I believe in, good for me. Except that in this case it also takes me out of an easy place to promote oneself without too much embarrassment.

If this is an issue for you, maybe this post will catalyze some deeper thought, or maybe it will kick you into gear. For me, I continue to take small steps. I do want the world to know I exist. I want people to read my book on creativity, and my novel. I want people to see my paintings, and buy them. I am proud of what I do, but self-promotion embarrasses me, no matter how ambitious I get. So perhaps all my small steps will create a path.