A Face Without Lines 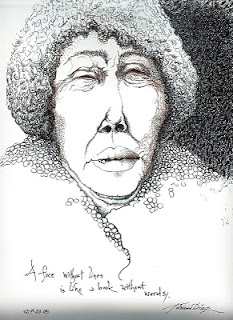 I did the drawing on the right as another meditation on age and beauty. It's titled: "A Face Without Lines is Like a Book Without Words".
I've always loved the elderly. My grandparents were my special guardian angels. They taught me about my ethnicity and the original language that has nearly been gutted from my family by anglo-American culture. I know that my experience was very unusual, especially in the U.S. where most kids don't grow up around their grandparents, and I'm still grateful for that opportunity. I'm realizing now, that they also taught me to value aging.
Women, of course, are more sensitive to cultural prejudices against aging than men. After all, there is a tradition in Hollywood to cast the youngest starlet as leading lady opposite an aging actor. Richard Gere, Harrison Ford, now George Clooney: all seem to have a phobia about love scenes with a woman their own age (on or off screen).
The only bias not considered politically incorrect, in fact, is derision toward age. Sure, it's against the law to say that a person is fired or not hired because of age, but it's not against the law to do it, as long as it's done for another, permissible, reason. Listen to advertising. Products for hair color, and especially make up and face creams openly warn us of the debilitating signs of AGING. With so many people of all ages looking for mates, AGE is the single most marginalizing or discrediting feature. It's true our culture hates fat, too, but body size is alterable, age is not in our control.
If humans didn't learn through experience, if we didn't change and evolve over time, we'd live in a world of Barbies and Kens. How would we destinguish ourselves from the masses? Youth, itself, would lose its meaning. What I advocate is a culture-wide multi-dimensional understanding of beauty. Why should we idealize skin with the light-reflective quality of ceramic glaze?
Imagine a world in which the title of my drawing were printed on billboards and in print ads across the Internet. "A face without lines is like a book without words." Lets believe in that. Let's encourage our daughters to get smarter, wiser, and more compassionate.
I remember discovering Confucius and Radhakrishnan in college. It was as exciting as science fiction. My face was young and fresh, but my mind was excited by what is ageless in the world. Then, reading Jung's Memories, Dream, Reflections for the first time, I realized that the mind itself was a vast universe.
Developing my skills as an artist took me deeper into the study of line, and that's when I understood what makes the aesthetics of visual humanity most interesting. Line can be read like words. Some lines are dark, gouged by time into canyons of anger or hatred. Some lines are playful, they develop through the habits of laughter and play. There are worried lines, sorrowful lines, loud lines, and quiet lines.
Each of us has our own book imprinted into our faces and our bodies. I think it was Lincoln who said, 'Anyone over forty is responsible for his face'. Our habits write our story. Take a look in the mirror; don't be afraid. Read your story. What will be written there tomorrow?
Posted by Adriana Díaz at 2:08 PM 1 comment: