It seems nearly impossible that it is time for East Bay Open Studios again, but that is the case. We just celebrated  the opening reception for the Open Studios exhibition, and this is also the 40th birthday of ProArts, the organizational engine that drives Open Studios in the East Bay.

Once the pressure of detailed preparation is done, Open Studios becomes a nice opportunity to reconnect with regulars (people who come by each year to see my work and say hello) and to meet new people. It’s nice to get new work out into the open and get responses from people. I am happy to say, most people ask very pertinent questions. Only once did a lady actually put a swatch of fabric next to a painting to ask her husband, “How do you think this green would go with the sofa?”

If you can get a chance to visit the Pro Arts gallery at 150 Frank Ogawa Plaza, you will see work by over 400 artists. Each is given a 16” square. This makes for an eclectic and fun exhibit. Give yourself  time to take in every piece. You can also collect post cards of those you want to remember, and pick up a catalog with maps.

The painting posted above is a detail of a 36" x 36" piece entitled Blue Lagoon. I hope you will come by to see the whole painting. I will be with my usual gang: The Uptown Twenty, we call ourselves now. We create a beautiful shopping environment within an auto body shop. You must come see us, it is a beautiful place. We have painters, potters, jewelers, weavers, and mixed media artists, all exhibiting under a skylight bright ambiance. We have also live music off and on throughout the weekend, some food to munch on, and tables where you can sit and rest your feet.

Hope to see you there!

Posted by Adriana Díaz at 2:42 PM No comments:

Your Voice in the World

It’s been quite a while since I’ve posted here, but I have not been twiddling my thumbs.
Since the last posting the first Women Write Now! class became a reality and we are moving toward a summer session that will begin in July.
Watching the women in that circle become better writers is only a part of my reward. They have grown into a genuine support group, learning from each other about their lives, their goals, and their histories. Best of all they have developed new relationships to words. They are beginning to think of themselves as writers, and that shift in identity brings strength to the work, and to the soul. Writers are keen observers. Writers are excellent listeners. Writers develop all their senses to become a more acute receptor, and an honest witness to life. 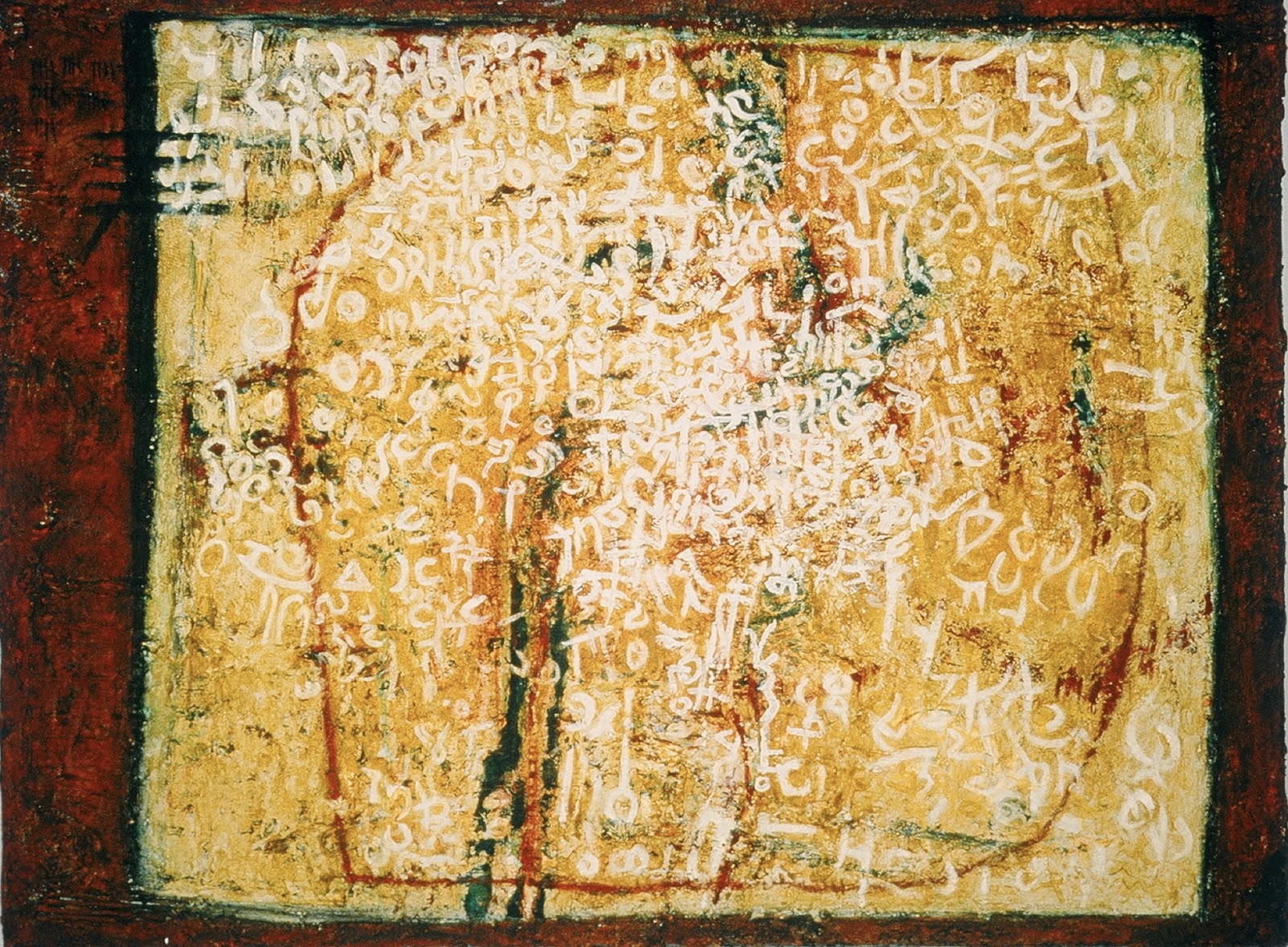 The painting I've included in this post is titled
At a Loss for Words. I created it from the sense of yearning I felt in my body when I wanted to write something clearly and succinctly, and nothing came out but verbiage. It was like having no language at all, simply an overpowering urge to express myself. Studying writing gave me tools to deal with that urge and with the frustration that came when words seemed to back up in my head like a traffic jam. I have come a long way from those days, but it was my experience that contributed to my desire to help others searching for their voice, and a skillful command of the English language.
You might remember that last year, it was the abuse of women going on around the world that compelled me to create Women Write Now! This year, in April, more than 270 girls were kidnapped from their school dormitory by a band of rebel terrorists called Boko Haram. The terrorists have now announced that they plan to sell the girls or offer to trade them back to their families in exchange for imprisoned rebels. It is moving to see that there is a strong international expression of outrage over this atrocity. It has finally forced the world to address the crime of human trafficking as it thrives around the globe. Girl especially are kidnapped or sold into slavery and taken away from their home countries, or they are transported to undisclosed locations within their own countries.
One of the women in my first writing circle travels to Africa, Haiti, and Nepal doing art therapy work with imprisoned women and poverty stricken children. I feel so proud that WWN! has an immediate global presence through her work and her compassionate character. Strengthening her voice to recount the stories of her work, will be one way I can contribute to the struggle for basic human rights, and an end to poverty.
The fact is, though, we live in a time when everyone can have an impact on the other side of the globe. We can speak out and protest in a matter of minutes. Your voice, your words, have power to expand your presence as a creative person in the world. Developing your voice calls you into a new practice. That word practice implies discipline, a word that often makes people balk and retreat. But during a writing circle conversation, we realized that discipline is not synonymous with repetitive, daily routines. A discipline is a constant awareness, a constant intention, a constant concern. A discipline is part of your inner life, and eventually plays a role in your view of the world, and the way you choose to take part in it.
If you are interested in learning more, or joining a Women Write Now! circle, call me at 510 530-4182 or write me through this blog. I’ll be happy to hear from you.

Posted by Adriana Díaz at 1:57 PM No comments: