Last year I announced the start of my project called Women Write Now! and brought a powerful force into my life. That force is the power of the word. I have talked before about my fascination with the phenomenon of language, and how I have focused visual art to explore the unnameable role that language plays in our existence. With the beginning of WWN! words and language moved to an even more central role in my life. 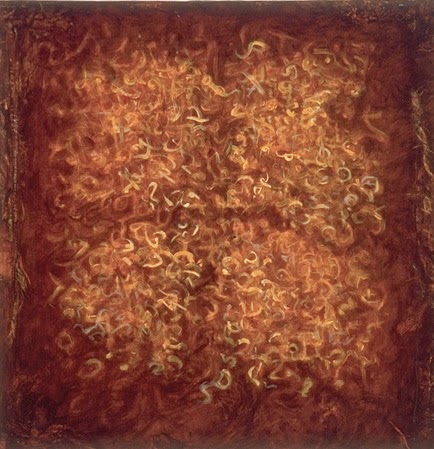 The title of this painting is "Breath", the most essential aspect of the spoken word. The painting is part of a series I created in the 1990's to begin my exploration of language as a human phenomenon. I recognized that the experience of growing up speaking and listening to two languages played an important role in my experience of language and my intuitive relationship to it. English is not my definition of language, and my paintings were not about the experience of speaking English. The paintings are about the experience of being an animal who is linguistic. The experience of speaking more than one language allows me to feel my brain go into "language mode". We hear a sound, we mimic that sound, and soon we have a collection of sounds that are mutually understood, and we create a culture that the sounds are a part of, they are even the tool for defining our culture, and forming it into a life pattern. Eventually then, we have ethnicity, regionalism, flags, countries, and laws. All of that based on the fact that we have a common language. Of course, we now live in a time when languages spill across borders, swim across oceans, and fly into the remotest corners of the planet. So we have translation, and the influence (for better or worse) of one culture over others.


Women Write Now! has given me new relationships with people and with writing and with the whole process of communication through written words. So when a friend recently posted a quotation from the American essayist Dinty Moore, it grabbed me into a big bear hug. And here it is for others to enjoy:

"If you want to be a writer, you have to love to write, love revision, love shaping sentences. You have to adore words and the endless possibilities of words in combination. You have to know in your heart that even if no one ever read a word of what you have written, you would still do it, for yourself, because the process, the practice, is thrilling and inescapable."

As the paintings from the nineties illustrate, I've been approaching words for some time. I have been feeling them in my bones, oozing their physicality out my fingers. I've been a writer all my life, but now I am part of the Word Tribe. Yes, we are a tribe that roams the world, that speaks in many tongues, that listens with antennae, and speaks even when silent.

Last weekend I went to Codex, the book fair at the Richmond marina. That's when I realized that I was part of a tribe. Those books were not published a thousand copies at a time. No, they were, in some cases, hand sewn, hand painted, drawn, imprinted. In the air, every language could be heard, and yet, it felt like a single language was spoken.  It felt like home.

Posted by Adriana Díaz at 2:31 PM No comments: